Speeding up an OLS regression in R

Yesterday a colleague told me that he was surprised by the speed differences of R, Julia and Stata when estimating a simple linear model for a large number of observations (10 million). Julia and Stata had very similar results, although Stata was faster. But both Julia and Stata were substantially faster than R. He is an expert and long time Stata user and was sceptical about the performance difference. I was also surprised. My experience is that R is usually fast, for interpreted language, and most procedures that are computationally intensive are developed in a compiled language like C, Fortran or C++, reducing any performance penalty.

The model he was trying to estimate was the following:

The result is not unsatisfactory in itself, quite the contrary, and only in some particular settings (like bootstrapping) this would be a problem, but the relative performance to Stata was not that great. On his machine, this was about three times slower than Stata. I know that lm() function does have a lot of overhead, so I tried other approaches.

I’m using the speedlm() and speedlm.fit() functions from the speedglm package, and the fastLm() function from the RcppEigen package. I need the ggplot2 and microbenchmark packages to make a performance comparison and plotting the results.

Since some functions take the input data as a matrix instead of a data frame, I’m also creating matrix representation of the data:

Before discussing the results, a word of caution. This is a simple toy example. The effective performance of these functions will depend on the problem itself, the operating system, the math libraries that R is using, the CPU of the machine, and the sustained maximum CPU clock of the computer, among other things. Moreover the lm.fit() and .lm.fit() functions shouldn’t be used directly, as stated by the R documentation.2

First, let’s check if the results are the same for all approaches:

Then we can compare the efficiency of the different methods: 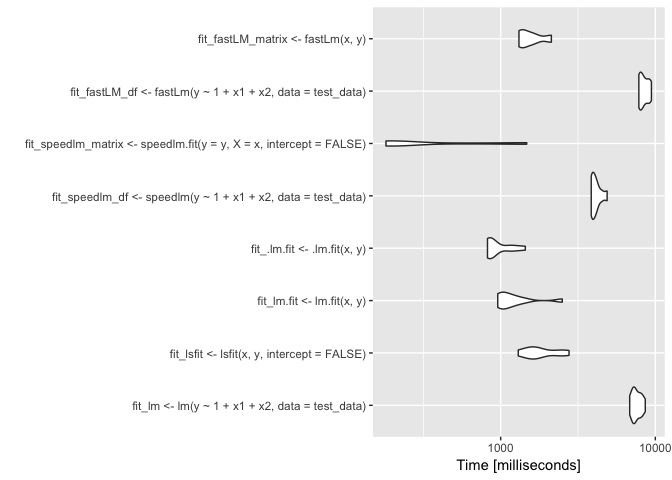 The x-axis of the plot is in logarithm scale. The results show that the computational speed can be substantially different and faster than the lm() function. One method, in particular, the fastLm() function using matrices as an input, resulted in a very small computational time (about 0.2 seconds). By the way, this result is much faster than Stata.

This simple example illustrates that performance comparisons between different statistical software are hard to do. They will be dependent on our level of expertise in each language. I’m my opinion performance is just one dimension we should take into account when choosing a software/language. The depth and breath of R, and it’s data manipulation tools more than compensate for any performance penalty from using an interpreted language. In any case, when I hit a performance bottleneck it is easy in R to integrate C++ or to parallelise the code.